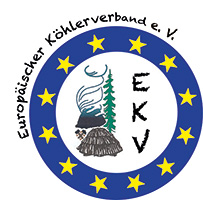 What a discrepency to the historical importance of charcoal and wood tar over the last millennia in the cultural and technical evolution of mankind!!! Since: without charcoal not a single gram of ore could have been cast and processed. Without wood tar not one ship would have been seaworthy!

Since the knowledge about this has slowly been disappearing and the craftsmanship was in danger of being lost, in the mid 1990s some charcoal makers from traditional charcoal making regions started to develop ideas on how to counteract this development. As a result they decided to form the European Charcaol Burners Association, where active charcoal makers and tar makers as well as friends and supporters of the old craft could join together in a European network to revive and maintain the tradition of the charcoal craft.

On 3rd October 1997 the charcoal makers of the Stemberghaus in Hasselfelde (Harz) held the foundation meeting of the European Charcoal Burners Association. Eighteen active members signed the founding resolution. The idea was European, the members still only German. This should soon be changed. The idea of this umbrella organisation soon spread word in other European regions. Nearly twenty years later the associaton counts about two thousand members.

In the meantime the association umbrellas more than forty clubs and societies, four municipalities and more than seventy single members. In addition, there are eight sponsoring members/institutions. Friends of the charcoal craft from Germany, France, Great Britain, Italy, the Netherlands, Austria, Poland, Romania, Slovenia, Sweden, Switzerland and the Czech Republic shape this European network which crosses national boarders and already reaches as far as Egypt.

The association is a registered association under German law and operates within its articles of associaton. The general meeting is the highest panel. The executive committee is elected every four years and is headed by the president, the vice president, the treasurer and the secretary. In addition there are the members of the extended committee.

Highlights of the European Charcoal Association are the biennual European Charcoal Burners festivals which host upto 300 participants from all over Europe.These festivals of meetings, professional and cultural exchanges, cultural programs and the general meeting last several days and take place in different locations:

Since 2006 the association publishes an annual magazine 'Der Köhlerbote' with pictures and reports of the activities of its members and technical topics about the charcoal and tar craft.

The free publication series with 15 editions so far covers scientifical articles about the charcoal craft, tar manufacturing, forestry and mining.

In October 2016 a central archive has been opened in Sosa which collects extensive literature, films and DVD's covering the whole range of themes connected to the European Charcoal Burners Association.

The implementation of the UNESCO-convention for the worldwide protection of immaterial cultural heritage 2003 has led to the official recognition of our traditional trade in four European countries:

- 2011 Charcoal burning has been entered in the national list of immaterial heritage in Austria;

- 2012 Charcoal burning in Entlebuch' has been listed as living culture in Switzerland;

- 2012 Charcoal burning also has been listed in Slovenia;

- 2014 Charcoal burning and tar making by the European Charcoal Burning Association has been successfully entered in the first register of immaterial cultural heritage in Germany.

We hope that further official approval will follow in other countries. The association is currently preparing the next application: the registration of the charcoal and tar making craft in the 'representative list of immaterial cultural heritage of humankind'.

With the recognition as immaterial cultural heritage the European Charcoal Burning Association has committed itself to the protection of old technologies so that also successive generations will be able to carry out this craft and pass on these skills to generations to come.  This is more then preserving a tradition! As in the meantime, insight into the charcoal craft has been worldwidely used by scientists to fight the energy problems of our time: its use in the production of solar cells, to improve soil conditions (Terra preta, Terra carbonaria), in filter technology, medicine etc., which shows that an old craft can always regain its value in modern times and live on with a promising future.